You are using an out of date browser. It may not display this or other websites correctly.
You should upgrade or use an alternative browser.
L

Looking at possibly changing my 1991 KDX-200 with conventional forks over to a set of USD forks from a 1993.

What issues (if any) will I likely encounter with the front wheel/axle/brake caliper mount/etc working out without having problems with the conversion or will it involve major issues with compatability between the two different forks??

THANKS for any advice!
L 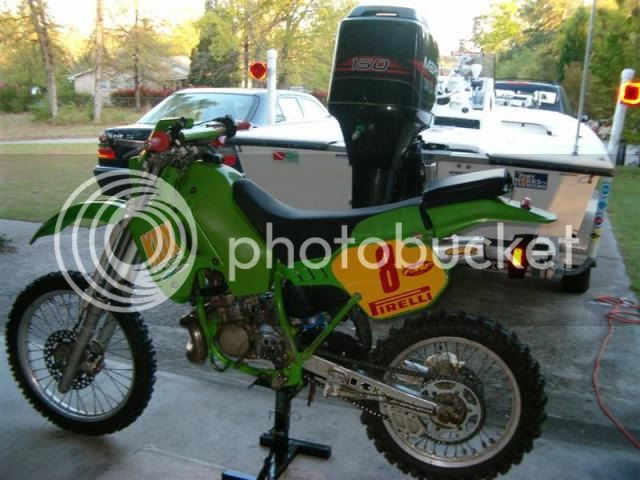 Hmm, I just bought a '90 and I'm interested in knowing the answer to this as well
Marana, AZ

most people have said that the 93 usd forks are no better than the rsu forks and have gone with the kx conversion that involves the whole front off a kx 125/250.

If you have the clicker adjustment at the bottom of your forks you may want to do the shim stack mod (-2 shims) search it in the forums.

The "shim stack mod" is for 1995+ usually. The forks he has are damper rod style. I wouldn't try it on the USD forks due to how few shims are in it.

Swapping out the complete front end proved significantly easier in my conversion (XR250 with KX125 fork). Something to keep in mind is the steering stop situation. Some bikes have ears on the sides of the frame head, some have a tab on the back / bottom of the stem, etc... Then you also need to make sure your frame & the new stem are compatible or come up with a stem / triple clamp / bearing solution that solves it. Make sure you understand how what you have and what you want might conflict and work it out before you go to a lot of work & expense. Besides just being easier to do you then don't have a mix of front end parts to deal with when you need replacement parts.
"I ride, therefore I crash." - Patman ~~~~ "Do or do not, there is no try!" - Yoda
J

wheel, axle, and caliper are different on the 93-94. Additionally, those forks are only slightly better. Pretty much on par with the 95+ conventionals. Hardly worth the trouble of sourcing a new wheel/caliper.
L

How good do those emulators work?
Marana, AZ

The emulators work really well from what I understand, and should be quite an improvement. There is quite a bit you can do to your existing forks to make them better.

The best option though is probably a front end conversion from an MX bike. I've seen yz forks, ktm forks, and of course the most popular kx125/250 forks used. You do need the entire front end usually, and it's most likely not bolt on. You have to use the kdx stem with the mx triples, possible machine work there..

I'm working on a set of 93 yz250 forks right now. 43mm USD's, cartridge type with rebound and compression adjustment. I don't know much about them, but I got the complete front end for free sans caliper, and the 94 kdx caliper I have bolts right on. So my only cost is the rebuilding (seals and bushings) and the time to figure out how to mount them up.

What's the story on the 93 USD's? They can be improved probably easier and cheaper than the older conventionals you have. As a base they're on par with the later model KDX conventionals, and there are good upgrades for them as well. I'd probably only consider it if the 93's were somewhere between dirt cheap and free, personally. If you decide to go that route, I'll have some 94 front end parts after I'm done with the yz front end conversion. I should have front the wheel/rotor, and I've got an extra caliper but no MC. Triples, etc.
L

I'm pretty much convinced now that I will just put some .35kg springs in her and let it go at that.....


Good luck with the Yama-saki front end project.....sounds pretty interesting for sure.
J

Should be an improvement I think. I'm mostly after the rebound adjustment, and hey, the whole front end was free :).
L

you certainly can not beat free forks !

The RaceTech spring rate calculator is miles apart from what Fredette suggests?! (.35kg)

I would have to weigh 89 pounds to use a .35kg rate (using the RaceTech spring rate calculator) !!

Pretty sure that will do the job.

From the Race Tech intructions:

The triple rate kit takes advantage of the fact that springs "in series" (stacked on top of each other) are softer than the individual springs themselves. The primary (long) spring by itself provides the stiffest rate (.46kg). The addition of a single secondary (short) spring makes the rate softer (.43kg) The addition of a second short spring makes it softer still (.40kg)