Logs and rocks are no match for the hybrid FC350. A snappy engine, coupled with stout suspension and a lightweight chassis, resulted in a bike that a Pro-level EnduroCross rider could use to the fullest. This bike wasn’t for the faint of heart or those short on skill.


Mike Brown is one of the greatest all-around racers to ever throw a leg over a motorcycle. It’s a brazen statement, but facts don’t lie. Brown spent his formative years racing Supercross and Nationals, making his mark by winning the 2001 AMA 125 National title. The Tennessee native was well known for his skills on smaller bikes, but it is what he has done since stepping away from motocross that has catapulted him to legendary status. At 42 years old, Mike makes his living as a full-time offroad racer. The switch in disciplines was a lucrative move. Since hitting the trail, Brownie has won a WORCS title, piloted the ISDE U.S. Trophy Team, won an Endurocross X Games gold medal, run up front at Baja, and narrowly missed out on winning last year’s Endurocross title. The stat line shows Mike Brown’s multitude of talents on a motorcycle. Brown’s front brake can be turned on like a light switch. The Braking oversized rotor, matched with a Brembo works caliper, did the trick.


KTM deserves credit for farming Mike Brown up through its offroad racing program. Instead of throwing the likable rider into the shallow end of a deep pool of talented offroad maniacs, they entered him in the motocross-friendly WORCS races. A combination of offroad and motocross, with intense races that are more of a sprint than a torture test, Brown took to WORCS like a cow to cud. As his experience grew, so did his thirst to compete in more technical arenas. Enter EnduroCross—a mixture of rocks, logs, tractor tires and water holes set around a minute-long course inside an arena. Mike Brown spent his youth racing inside stadiums, so being suffocatingly close to the fans wasn’t a problem. What took patience was navigating around a challenging track while trying to pass for the lead. In Endurocross, the course is a racer’s number one foe. The Husky offroad team runs NK SFS air triple clamps, just like most of the KTM and Husky team. The bar mounts have tiny air shocks hidden under the clamp to suspend the handlebar mounts. The SFS clamp lessens vibration and calms down the steering response. Mike runs 75 psi in the air shocks.

THANKS TO MIKE BROWN, HEIGHTENED SPEEDS AND GREATER INTENSITY HAVE CREATED UNBELIEVABLY CLOSE RACING, DESPITE THE RIGORS OF ENDUROCROSS. Husqvarna tested different transmission ratios but returned to the stock FC350 layout. The final drive is a 12/49 (4.08 ratio) pairing instead of the stock 13/50 (3.85 ratio). Mike typically rides the track in second and third gear. Most Endurocross Pros rely on the Rekluse EXP automatic clutch, but a motocrosser at heart, Brown prefers the Rekluse Core manual clutch system, which isn’t an automatic design.


It takes years for many racers to hone the skills needed to double jump over tractor tires and approach jagged rocks like a whoop section. Mike Brown is the exception to the rule. He immersed himself in Endurocross, taking an obsessive approach to learning the craft. The compulsion paid off. Although Mike has yet to knock off five-time EnduroCross Champion Taddy Blazusiak, Brown has come closer than anyone else. Mike’s mentality of attacking every obstacle with abandon forced the competition to step up. Years ago, Endurocross was entertaining for its unending crashes and bloopers caused by racers failing to master the terrain. Thanks to Mike Brown, heightened speeds and greater intensity have created unbelievably close racing, despite the rigors of Endurocross. Logs and rocks are now nothing more than a bump in the road to the finish. Have wheelie; will travel. Manualing up this steep rock face took an engine with explosive torque, a deft hand on the throttle and ninja-like balance. It doesn’t hurt that Brown runs a works Dunlop rear tire, which has a rubber compound as soft as a trials tire but with knobbies. How big of a deal is the works Dunlop rubber? Mike Brown is only given 11 rear tires per year. 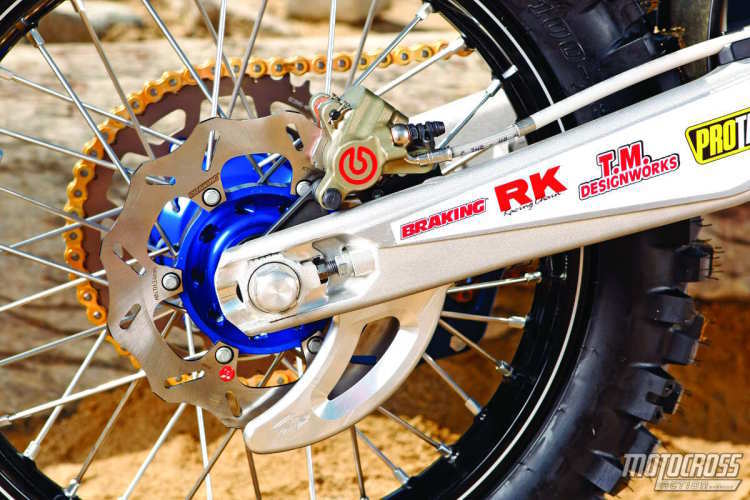 When you race on a track littered with rocks, logs and boulders, you need something strong to protector your rear brake rotor. Mike uses a stout shark fin.


The ex-Supercross racer signed on with KTM when he began his offroad adventure. It was a good pairing, but with the reinvention of Husqvarna, Mike Brown saw an opportunity to switch to a manufacturer with a rich racing heritage. Husky needed an established star to relaunch the brand, and Brownie was the perfect fit. Husqvarna offered Mike a two-year deal as its premier Endurocross rider, which he happily accepted. Brown’s FE350 is equipped with a WP Trax shock. The Drop Out system is beneficial in small bumps. As soon as the rear wheel leaves the ground, the system opens up and tries to push the rear wheel back to the ground as quickly as possible. The Trax system works best over rock beds, because the rear end is more inclined to stay in contact with the ground instead of hopping violently. Would you double from the tractor tires over the concrete tubing? If not, you aren’t cut out for Pro-level Endurocross. Husqvarna uses an FC350 motocross engine, even though the bike is referred to as the offroad-specific FE350. Why? Husqvarna didn’t import the FC350 to the United States when this bike was built in the race shop. Since Endurocross doesn’t have a homologation rule, Husqvarna can use the KTM Factory Services engine work. Husky also provides a 42mm throttle body (the stocker is 4mm).


Here’s the interesting part. Switching from KTM to Husqvarna wasn’t going to be an issue for Brown, given that the 2014 Husqvarna model line is identical to KTM’s offerings—save for the white plastic and a few other minor differences. Unfortunately, when this bike was built for Mike Husqvarna didn’t import its FC350 (the equivalent of the KTM 350SXF) to the U.S. Instead, Husqvarna built Mike Brown an Endurocross-specific race bike using an FC250 chassis and FC350 engine. Although the bike doesn’t have a single FE350 part, Husqvarna badges Mike’s bike as an FE350 for marketing reasons. In truth, Brown’s Husky is nothing of the sort. For 2015 Husky has an FC350. Mike Brown runs stiff fork settings that would normally be
used in motocross, because he rides with such speed and aggression that he needs forks capable of sustaining big impacts. The 48mm WP factory forks are Pro-level only.


MXA isn’t afraid to venture into unfamiliar territory. We’ve tested every type of motorcycle under the sun, including a dirt tracker and an ice racer. We have gone so far as to put a Honda CR125 engine into a shifter kart. Testing Mike Brown’s Husqvarna didn’t seem out of the ordinary, even though Endurocross is intimidating. So, we saddled up, kissed our St. Christopher medal and hit the first rock quarry we could find. It was worth the trouble. Mike Brown isn’t just one of the most talented motorcycle racers in the world; he’s also an excellent test rider. His Husqvarna FE350 is a testament to that fact.