I tore my top end down because I was getting piston slap, but I noticed the tiniest bit of rubbing on both the powervalve and piston. Not really anything on the skirt but up around the rings the piston has grooves all the around, its hard to explain theyre factory not from dirt and stuff, and theyre worn a little flat. There's also a rubbing mark on the powervalve. Does anyone have pictures of their powervalves rubbing their pistons? I'll get some pictures up tomorrow if I can.

Thats kinda what mine looks like. But theres wear on the middle of the powervalve right on the edge. Did your's have that? I still havent taken pictures but i'll try and take some and post them tonight. Both our bikes have the same drum valve.
Ok here are the pictures 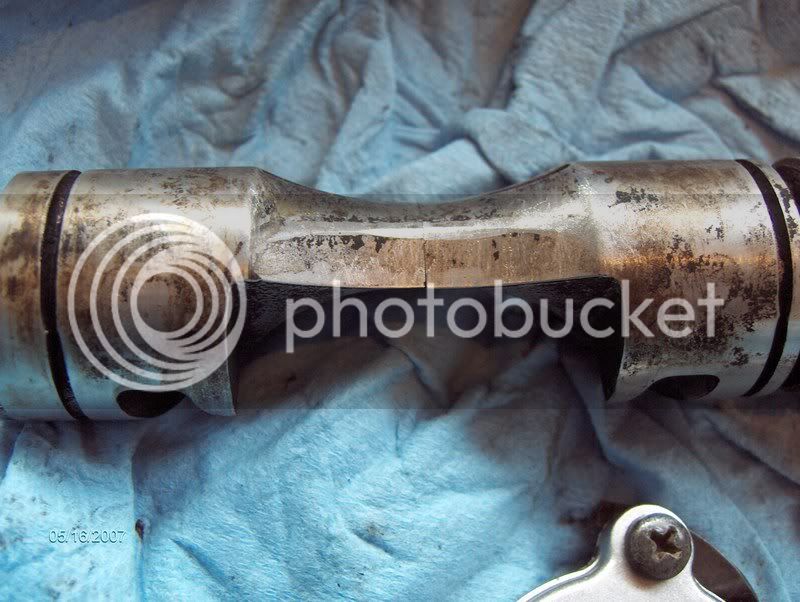 You can see where the wear mark is 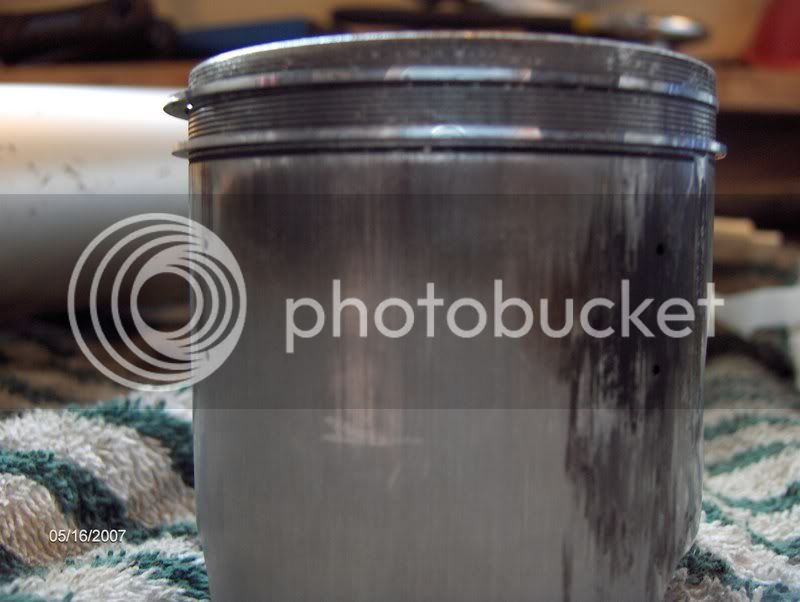 Its kinda of hard to see but you can see those ridges are worn a little flat and theres a little bit of scraping going on but not much. This piston was seized but not by me. The retarded last owner just put new rings in I guess. 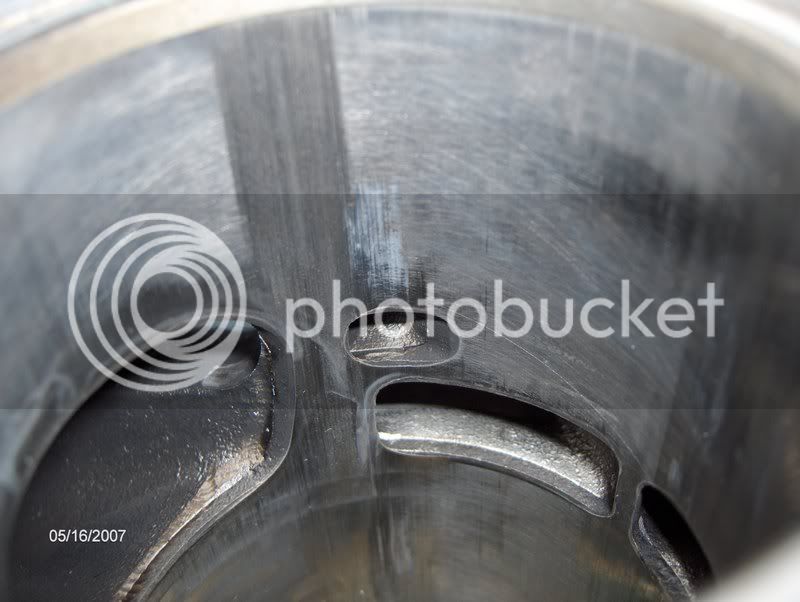 And here you can see where the platings worn through.

What is the powervalve clearance?

hi, i used to have a 89 yz250, last year with the steel bore great bikes.... anyway this problem used to be fairly common and Eric Gorr talks about it in his books, basically the valve has a stop plate on the l/h side of the cylinder that limits the valve from turning too far when it moves. however the stop plate is made of alloy and over time it wears and allows the valve to spin further than it should. after a while it can turn so far that it starts to hit the piston rings and makes a ticking sound, when its real bad it can cause the rings to snap and make a real mess....
easy to repair however, replace the stop plate and file the valve to give a little more clearence. check this by turning the valve to full travel while the head is off looking down the bore as the piston passes the exhaust port.
hope this helps. :cool:

To me it looks like my cylinders plated, like in the picture you can see that whole wall is starting to wear through and a couple spots there's bare aluminum. The stop plate hardly looks worn at all really but the tab on the powervalve itself is pretty worn. I just don't have the money to replace the whole powervalve on top of the replate, piston kit etc, its already going to cost me over 500 and I'll be into the bike for $2200. Could I get away with just grinding off the powervalve a bit? I wouldn't notice any decrease in power.

where is this stop plate people are referencing to in the picture below? this happened to me on my last ride on an 89 yz125 and although i have a clymer manual, im new to bikes and being a mechanic and i don't see this plate that can be replaced on the oem parts list?


something happened during my last ride, the power valve cover and left side piece actually shot out at my leg a few minutes after takeoff halway into the day! the thing was hot as hell even after minutes on the ground and with gloves on. no spooge or oil on that sucker at all and it was smoking on the side of the engine.

anyways my piston has a chip up top, surface scratches, and the power valve is grinded away like yours.

my bike was running like crap, like there was a hit still but you had to rev the heck out of it to get past some abnormal bogging. cant say i noticed the difference in the sounds while riding, but something i did caused it to blow like that? i dont know what happened with mine but to lose both cover screws then the valve screw is kind of wierd.

To me it looks like my cylinders plated, like in the picture you can see that whole wall is starting to wear through and a couple spots there's bare aluminum.
Click to expand...
lol, no this is a steel bore. you can see the thick sleeve where the ports come through to the cylinder, you can see where the alloy barrell meets the steel sleeve. this is great on these bikes because if you seize or scratch the bore you can just have the cylinder bored out to the next oversize and buy a wiseco piston to suit. the factory sleeves are very thick and can be bored out many times with no problems AS LONG AS YOU CHECK THE POWERVALVE CLEARANCE.


Could I get away with just grinding off the powervalve a bit? I wouldn't notice any decrease in power.
Click to expand...
yes you could but if the tab is very worn then you could also have someone build up the powervlave tab by tig welding it and then filling it to the correct size.


where is this stop plate people are referencing to in the picture below? this happened to me on my last ride on an 89 yz125 and although i have a clymer manual, im new to bikes and being a mechanic and i don't see this plate that can be replaced on the oem parts list?
Click to expand...
sorry mate i dont see any picture. but on the yz250 its a small round plate about 50mm diameter with 2 bolts holding it to the cylinder on the l/h side.
dont know why yours would have blown apart like that, sounds like your bike is possessed!! :yikes:

I went outside and stuck a magnet to the bore and it stuck. So it is an iron bore, and I'm happy I don't have to shell out 300 for a replate.

ur one of the lucky ones. just get it bored and pop in a new sucker and fix up the PV and youll be fine.

Is there a number stamped in the crown of the piston indicating it is oversized?

Well, since your bike is sleeved, you should move up to the next oversize that will restore the condition of the bore, either .25mm or .5mm. You will have to get the cylinder bored, and during the proccess, have the power valve clearance set. Don't forget to chamfer the edges of the ports before reassembling.

im still glad i came across this thread since i have an 89 yz 250 to service. i got this thing from a guy on craigslist for cheap but im trying to maintain it. i had not even looked over this bike much because it has ran like a tank, and im having a major issue every damn time i run the 125 and have learned not to touch things if you don't have to :)


anyways for those that care the 89 125 and 250 do not share the same power valve parts and if you look at the oem parts list they aren't even designed the same way!


this makes me wonder though, on each bike, what is actually allowing the power valve assembly to be rotated too far to begin with? during normal operation should that ever happen even if you have the throttle pinned?

i dont get why the 250 would have that safety stop and not the 125. on mine i guess if something happened on the governor side like slack or breakage, there would be nothing at that point from stopping the power valve from freely spinning.