You are using an out of date browser. It may not display this or other websites correctly.
You should upgrade or use an alternative browser.
7

You can try to guess while I upload a photo.
7

Ok, here is the answer. I broke, of all things, my flywheel weight. The center hub busted right out of it. It was within the first 5 minutes of riding today. The story is, I just finished a hill climb and was cruising back down to the truck. I rolled on the throttle a little bit and the bike accelerated faster than it's ever accelerated before. I thought it had caught a gulp of air through the seal or something. It ran up to the top of 3rd or 4th gear, then planted me head first into the ground. I was a little dazed but tried to get up, only to realise I was still sliding at high speed down the trail. That rubbed a significant portion of my arm off. I got back to the truck, started the bike up and noticed the plastic flywheel cover looked like it was pulsating. I thought, great I blew a crank seal. I pulled the cover to take a look and there was shredded plastic everywhere. Then I noticed the flywheel looked a little funny. What I hadn't noticed was that the flywheel weight had fallen out as soon as I removed the cover. I saw it on the ground and thought my day was done. Then, I realised that the center part of the flywheel weight was still acting as a nut and I would be fine to ride. I don't know if I made this decision because I had just landed on my head or what, but the bike ran fine the rest of the day. It really wore me out, though, because it has a crazy midrange without the weight. I'll probably be splitting cases and replacing main bearings as a precautionary measure before my next outing. Having that flywheel weight loose on the flywheel must have really out of balanced everything.

The failure may have had something to do with the set screws backing out, I did notice that two were backed out. I tightened them recently, too. You can see one loose and one tight in the second picture. It may have been cracking for a while because of the corrosion in the crack area. 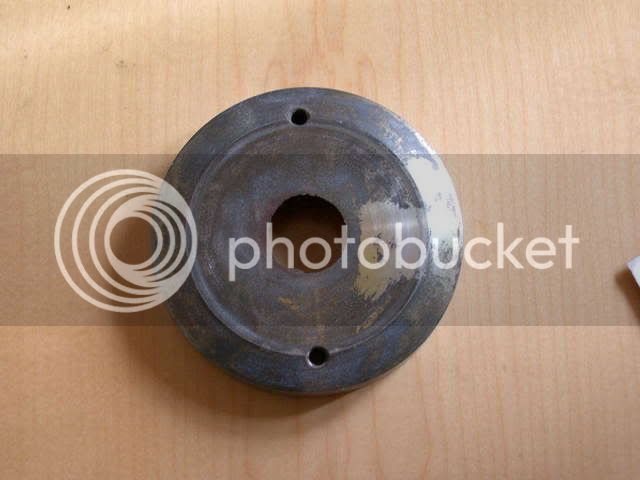 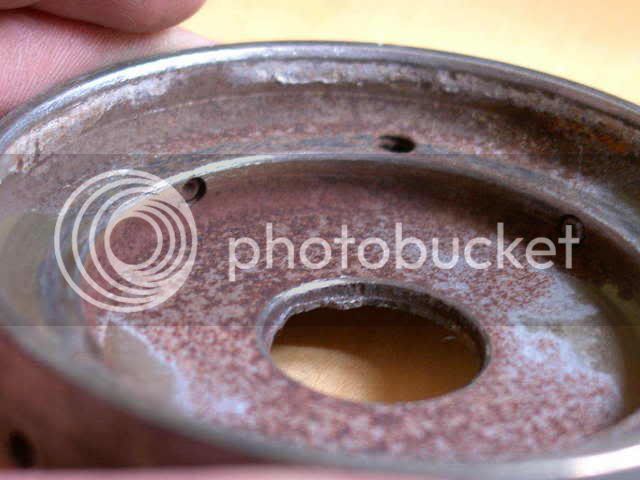 Yikes, that wouldn't be fun. I hope my flywheel weight doesn't pull any funny tricks like that on me.
7

I should get a picture inside of the cover. The older CR's had a plastic side cover and the flywheel weight rubbed on it quite a bit. When I first pulled it, everything was packed with plastic fuzz. I'm really lucky it didn't take out any of the ignition stuffs. I guess I'll be in the market for a new flywheel cover.

Gm,ouch,bolt on power,yeah right! I would recommend getting the stock rotor,do not use the Chinese crank bearings,if you fear your beer money use American bearings and seals. The money you are saving on trans fluid you could send your jug to Eric and have it modified to your preference,Ride Fast and Die Hard!
WHEN IN DOUBT, GAS IT! : 83CR480R, 97CR250R, 00CR250R 05CRF450
7

I am the one who adamantly supports American bearings, even over the OEM Japanese. What do you mean getting the stock rotor? The flywheel? There is nothing wrong with the stock one that's on there now. It's just a little scuffed up. I've got to get a job before I get the cylinder replated. It doesn't need any porting, it runs just right as is.
K

Fox doenst believe in bolt ons. He's saying you should send it somewhere and get it ported for low end power rather than throw some silly weight on there!
7

I didn't put the weight on it. In fact, I have tried, unsucessfully, to remove it in the past. That's why all of the set screws were recently tightened. I retightened them after an usucessful attempt to remove the flywheel weight. The weights aren't silly. It makes it harder to pop the front wheel up, but when you're flat tracking and riding on really slippery surfaces, it really makes the power more controlable. Since it's slippery as ice 80% of the year in Hollister, the flywheel weight can be advantageous. Of course, $80 to replace it is a lot of beer money so I think I'll just learn to ride without it. I do have to figure out how to get the remains of the threaded portion of the weight off so I can replace it with a nut.
K

Oh im not saying its silly I was more or less speaking for Fox. I have one on my bike and love it in the woods. $80 is cheaper than porting, but what happened to you is pretty rare.

I do have to figure out how to get the remains of the threaded portion of the weight off so I can replace it with a nut. Well,lets see a pic!I can honestly say,I have never seen a heavier flywheel weight,real time.The American bearing thing has been around a long,long time!I tried the chinese crap too!They have not a clue on putting ANYTHING of quality on the market,even when American companies are absorbed and hauled to the mainland it turns to crap!What kind of rubbers are on your bike?KX nailed it,I despise people putting out crap to get to our vulnerable areas,and I know there are people who swear by such lubricious bolt on magic,personally I think you would cut a striking pose,out riding with a tugboat con rod dragging behind your bike,to help it control the hit better!Changing your port timing and or head mod would be the ticket for longterm and quality!That is,if you still want your bike detuned!Hey,I heard today that alcohol makes your brain shrink,if that is a fact then,why does your head feel like its gonna explode when your hung over,more mis-information would be my guess!
WHEN IN DOUBT, GAS IT! : 83CR480R, 97CR250R, 00CR250R 05CRF450
7

I've actually got a bigger than a tugboat connecting rod to drag. This is from one of my other engines: Without pistons, I think the assembly weighs about 1700 lbs. 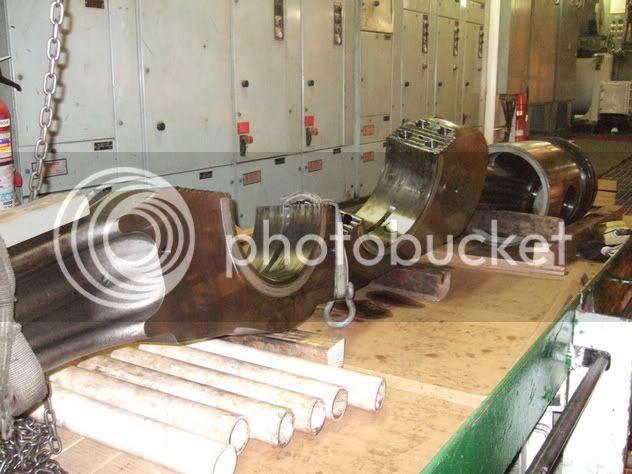 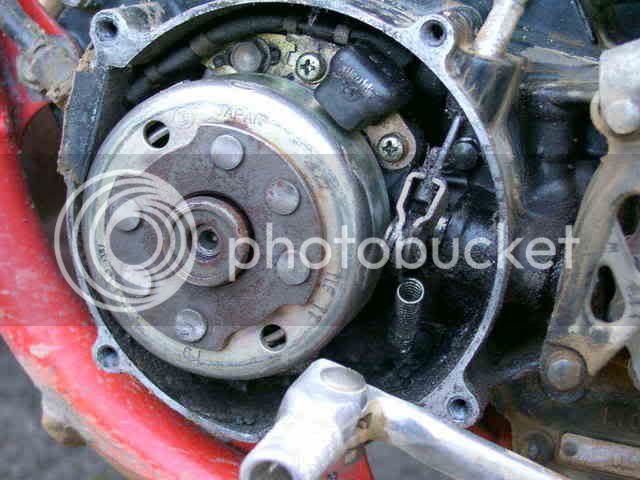 And the damage to the cover: 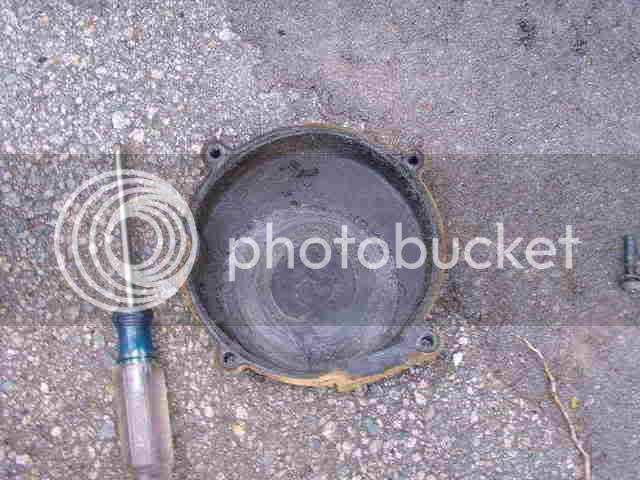 That's most of the debris that came off the cover. Like I said, when I pulled the cover, the area was packed solid with plastic wool. The cover is trashed. It's got a crack all of the way across it and the shifter has almost worn through so I was due for a new one, anyways. For the reeds, since you asked, they're due for a replacement. I did a bad thing and flipped them.

Funny you bring up the tugboat rod, I'm trying to get a job as a tugboat mechanic so I can pay for all of these repairs.
Last edited: May 4, 2007
J

Quote; Hey,I heard today that alcohol makes your brain shrink,if that is a fact then,why does your head feel like its gonna explode when your hung over,more mis-information would be my guess! Unquote.
Drinking beer or the hard stuff dehydrates your body taking moisture away from your brain and yes making it shrink resulting in a hang over. Drinking several glasses of water right before you go to bed after a night of mischief behavior will ease it and in some cases totaly wipe it away the next morning depending on how much you consumed the night before :bang:

just_a_rider said:
Quote; Hey,I heard today that alcohol makes your brain shrink,if that is a fact then,why does your head feel like its gonna explode when your hung over,more mis-information would be my guess! Unquote.
Drinking beer or the hard stuff dehydrates your body taking moisture away from your brain and yes making it shrink resulting in a hang over. Drinking several glasses of water right before you go to bed after a night of mischief behavior will ease it and in some cases totaly wipe it away the next morning depending on how much you consumed the night before :bang:
Click to expand...

Thank you rider for CORRECT information,for what its worth,consuming alcohol can be very self destructive,kinda like dumping sand in a running engine,need a near death experience instead!
WHEN IN DOUBT, GAS IT! : 83CR480R, 97CR250R, 00CR250R 05CRF450