Can't get it to idle by adjusting carb idle any help welcome.

how long will it idle for?
J

Did you know that a racing two stroke set up properly won't idle, having it set so it won't idle help you slow quicker for corners. You have adjusted the carb trying to get it to idle, there's only one idle screw and it is the only purpose it serves, run it in and it holds the needle jet up.
7

Some of the older carbs didn't have the screw that you mentioned. Instead, they have an adjustable choke circuit that just dumps fuel in until it idles. Generally, you want it adjusted so the bike idles for only a few seconds. Too little idle will make the engine bog when you roll on the throttle, too much will make it buck going into turns and potentially foul plugs.

"Too little idle will make the engine bog when you roll on the throttle",wrong,that is a jetting or mechanical problem."too much will make it buck going into turns and potentially foul plugs".I have never heard that one yet,I do not know what riding a horse has to do with your carb.Jetted and in good mechanical shape,your bike will respond from a closed position better than attempting to make it idle.Twist the throttle,your right hand will do good for an idle.
WHEN IN DOUBT, GAS IT! : 83CR480R, 97CR250R, 00CR250R 05CRF450

Well, on the Keihin PJ, the choke circuit is like an adjustable pilot jet. So, if it's turned in too far, the bike will be lean as you roll on the throttle and bog, especially after a long period off the throttle (like on a dowhhill). If the choke is screwed out too far, the engine will fire periodically as you decelerate and cause it to buck or jerk. These are my experiences with my properly jetted Keihin PJ. Since his profile says he has a 1985 CR 125, he probably has a carb similar to the Keihin PJ on my 87 CR 250, except with a round slide instead of the flat.

Don't believe me, this is what Honda says: 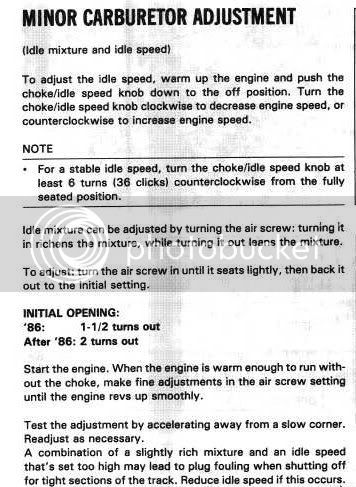 Thanks, I am thinking the float may need to be adjusted. It wont idle at all but it use to 6 months ago and no mods scince by the way my right hand is tired of having costantly twisting the throttle.

How do your reeds look? Float valves are really expensive, you don't want to have to replace that.

Honda stealer tried to charge me 45. That's just for the needle and doesn't include the seat. The guide portion of the seat on mine is worn out and I would like to replace it. It looks like it will be cheaper to buy a new carb.

If the bike can sit with the fuel valve open and not dump fuel out the overflows, your float needle is fine. Do check the reeds.
N

I have the same problem with my 1995 cr125. does the cut away on the carb slide go to the motor or air box side? didn't know about the enricher,do yoe turn the black knob? thanks
G

I can't believe that no one has suggested a good carb cleaning! After all it worked a few months ago, and if it isn't running gas out of the overflow tube I would just give it a good cleaning first, before spending money on parts that may not even be needed. But that's just me.

I really like how everytime someone says their two-stroke won't idle, there is always at least one person that says that it should not idle because it's a two stroke. This is crap, it all depends upon what type of riding you are using the bike for, MX or woods! Tell me how many true woods racers in the GNCC that don't set their bike to idle? I noticed that David Knight and many other pros have their bikes set to idle! Not everyone is on the mx track, and with proper tuning a two stroke can idle and still run just fine.
Rant done!