You are using an out of date browser. It may not display this or other websites correctly.
You should upgrade or use an alternative browser.
I

Sorry about the bad pictures, 7 megapixels and the damn thing can't even take a picture. Well anyway, I have a honer, do you think I could get away with honing and changing piston and rings? They arent that deep, but I dont know how much metal just honing will take away. BTW, fist two pics, small scratches on top side, 3rd is a real aweful looking piston, and 4th you can kind of see a small few beneath the left side of that central exhaust port. Thanks.

Use the macro mode on your camera for close-ups. If you don't get a green light, you're too close and the camera can't focus.

On to the cylinder, it actually looks ok. It's hard to really tell from a picture, but if the scratches don't catch a finger nail you should be ok.
I

Thanks for your input, but i believe those scratches below the exhaust are at least 1 or 2 mm deep. I'm honing it out tonight, and I guess I'm just going to hope for the best. Thanks
I

Heres some koreckly taken photos (thanks76gmc1500). After honing, its not looking too great...

Looks like it'll need to be bored out a few sizes to clean that mess up. How did that happen anyhow? That piston looks horrible.
I

Thats what I have been afraid of. I am not sure about that whole boring process, because I don't know if my dealer will be able to line me up with the adequate piston and rings for the new bore. I think the pistons vertex makes for old Husqvarna Cr's are actually for Honda Cr's. Its not so much the bill that I am worried about, but whether I have any options at all.

I was riding pretty slowly through a hedgerow, and when I came out and stopped my bike was dripping radiator fluid, and my radiator was smoking a little. I turned 1 corner on a track on the way back to my friends', and my compression went bye bye. Needless to say, it was a long push home.

Any comments on whether or not its a good idea to hand it over to the dealer, or am I wasting my time and money?
7

Those pictures are much better. The scratches appear a little worse in this series of pictures. The scratches parallel to the travel of the piston wouldn't bother me. The ones perpendicular could cause more trouble. Do they snag a fingernail? I think you'll be ok to run it as is.

What you do need to do is chamfer thoes ports, that may be what caused the scoring in the first place. It appears a piston ring snagged the exhaust port.

The angle on your crosshatch is wrong, too. You need to move the drill up and down more quickly. I can't remember if the crosshach angle is supposed to be 30 degrees or 45 degrees.
I

76GMC1500 said:
Those pictures are much better. The scratches appear a little worse in this series of pictures. The scratches parallel to the travel of the piston wouldn't bother me. The ones perpendicular could cause more trouble. Do they snag a fingernail? I think you'll be ok to run it as is.

What you do need to do is chamfer thoes ports, that may be what caused the scoring in the first place. It appears a piston ring snagged the exhaust port.

The angle on your crosshatch is wrong, too. You need to move the drill up and down more quickly. I can't remember if the crosshach angle is supposed to be 30 degrees or 45 degrees.
Click to expand...

They barely snag, but they still do. When I run my nail across, it doesn't hold it, but with a little force it sort of does. Could you tell me more about this "chamfering ports"?

And thanks for the info on the cross hatch, I'll be sure to do that.
7

To chamfer the ports, take a grinder and bevel all of the edges of all of the ports. Sharp edges snag rings.
I

Alright, borrowed a good honer from a guy and it turned out nice. The black streak going horizontal is just from the tool I used to measure the bore. This brings me to my next question. The diameter of the bore on the top read about 69.79-69.83 mm. The dead bottom reads more along the lines of 69.90. Now the aftermarket pistons are only sizes 69.95 mm to 69.97 mm. Is the cylinder supposed to expand under heat, or is it just the opposite?

edit: I could be measuring wrong as I have a tendency to do things very wrong, all the time... I'll keep at it and reply with different readings if need be.

Piston to cylinder wall clearances should be greater than .0015" measured at the tightest point. .004" is the maximum clearance most manufacturers allow. The piston needs to be smaller than the cylinder.

Your measurements are weird. Generally speaking, on a worn cylinder the largest diameter will be somewhere in the middle, measured fore and aft (orientation of cylinder as installed in the bike). There will be a thin band at the very top of the cylinder which will match the original bore diameter. Near the very bottom is usually fairly close to the original bore diameter, especially when measured left to right.
Generally speaking, the difference between the widest portion of the cylinder and the narrowest shouldn't be more than .002" (this measurement is referred to as taper). The cylinder shouldn't be more than .002" out of round.

Because your measurements don't follow the standard convention for cylinder wear, I would be suspicious of operator error or the accuracy of the measuring instrument.

However, if your measurements are correct and your cylinder is indeed smaller than most aftermarket pistons, this is good news. You can buy any aftermarket piston and have the cylinder bored to match (usually $60 or so). If this is the case, you can start fresh and you won't have to worry about the scoring or the crazy measurements.

Don't forget about chamferring those ports. Here is a pic looking through the intake port of my cylinder at the exhaust ports. I wasn't trying to show the port chamferring, but it's the only pic I've got. See the band around the ports, that's where it has been ground back at an angle. All ports, intake and exhaust need to be chamferred. The important thing is that there is a smooth transition that doesn't catch the piston rings. 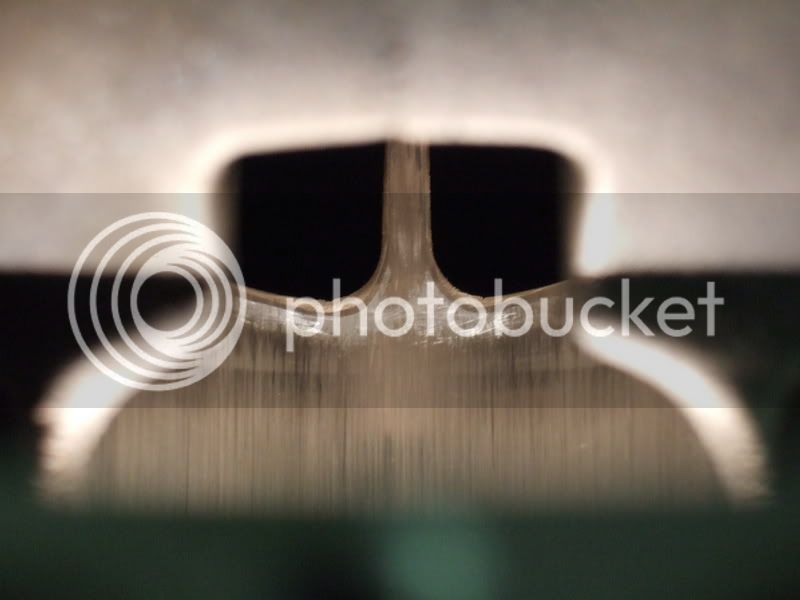 I think you are spot on a many things:

1) Operator error, AND the tool is not correct, just something to get a ballpark reading

2) I was going to ask next if I could just bore my cylinder if the piston was too big :cool:

My father went out and measure my piston and got 69.55 mm.
His reading on the cylinder was 69.71 mm. I guess I'll just go over it in my head for a while, get the piston that I think will be best and see how it goes.

My gut feeling is that I'm not getting correct readings because as you said, the bottom and top come out different, and I am getting substantially different readings than my father. I think in the end I will sway toward the biggest one, and go from there.

Also, I hit all the ports but only with sandpaper. Do you think it will be enough? You can kind of see the job it did in the most recent picture.

I really appreciate your help, I've never done this work before so it should help me for future experiences.

That would give you a piston clearance of 0.16mm or 0.006" which is a little on the loose side. You will probably gain back 0.0015-.002 inches using a new standard piston which puts you borderline on the service limit. If it's an option, boring the cylinder and going oversized is definately a good one. Don't automatically go to the largest oversize. If something happens and the cylinder gets trashed at the largest oversize you will have no more to go.
D

u should run a 32:1 mix your piston wont look like that next time.
I

7
Pictures of the damage