Young Ted is another year younger! How did he celebrate? With a ride of course!

You are using an out of date browser. It may not display this or other websites correctly.
You should upgrade or use an alternative browser.
K

All of our's hero, Young Ted got another year younger yesterday! Is there any better way to celebrate a birthday, than getting together with some friends for a ride? Not in my book! Ted and I started this tradition of a birthday ride a few years ago - nice way to kick off spring as well.

Yesterday we met up at the Evart trailhead. I had a for sure commitment from Ted...and a few maybes from some others. When Ted says his will ride...he rides - no ifs, ands or butts! My son's Mark and Mitch would be coming along. Friday night we loaded up the bikes, with the ground around us 100% covered in snow - cold and windy. We kinda wondered what to expect for Saturday. On the drive down, I called one of our "maybe's" 2big4aKDX - his wife answered to tell me he was uh...still sleeping! A short while later, CR250@winters calls me - needing some motivation for the ride, as he had to lock his truck in 4 wheel drive to get through the snow in the driveway to load his bike up! But he was coming at least.

Got to the Evart trail head to see it packed with trucks! Ted was there already (and we were easily 25 minutes early), Larry was with him. I tell them about the no show for Neal - to have Neal walk up a couple minutes later. He had been there for some time already! Guess his wife got him outta bed. Mike K calls enroute to tell us he discovered his bike had a flat rear tire when he stopped for gas, but he had filled it and it seemed to be holding air - presumably a valve stem issue.

After fixing a leaky carb float issue on Mark's bike we head down the trail. Maybe 3 or 4 minutes in, I blow a corner due to NO rear brake! I discover the bolt that connects the pedal to the rear brake cylinder plunger missing. A few minutes later on down the trail. So far, it has been a rough start to this ride!

We came into that blow down section that Marlinburg got caught in. I can not image what it must have been like to have been in that mess as it was all coming down! We cut out an offending small tree across the trail, and make it maybe another 2 miles to see Mike K and Mitch sitting there - his tire was FLAT!

Ted came to the rescue with a spare tube, tire irons, and an air pump. 19 minutes 6 seconds later, the tire was fixed. Great job guys! :cool: I think Kurncz needs to request a partial refund from Magoo on that bike... clearly it was defective. :p

Finally the ride would start going well. PERFECT conditions. Cool, but very comfortable temps, sunny clear skies. Very little snow on the trail. If you added up all the snow we rode on, it might have been 500 feet max.

Back to the trail head for some birthday cake for everyone. Mike, Neal and Larry say they have to head home. I was eager to do some more riding (this was my first ride since my ruptured disc - I wanted enough to get a good idea how I was doing). Ted of course says he is game. Mitch joins in. Mark decided he was just going to relax back at the truck. Our second loop was a blast for the 3 of us. Riding it clockwise this time, made for a different trail. Still beautiful conditions.

We got back to the truck by about 6:15 PM, loaded up the bikes and headed into Evart for some Pizza for everyone. We finally parted ways about 8:00 PM.

What a perfect day - even including our mechanical issues. Fantastic weather, great friends, great trail to ride. This was my first time on the Evart loop. To me it is one of the most scenic trails in the state. That series of ponds you ride by, the hills etc. (could do with fewer whoops though).

Here are a couple pics - sorry for the crappy quality - they are camera phone shots. Mike K learned a few tricks from Ted I think! Oh, the last pic shows that the mosquitoes are out already. :nener:

you gotta watch out for these critters along side the Evart trail...

Flat tires must be contagious. Went to my parents place yesterday afternoon so the boy and his cuzin could get some riding time out there. Had to replace a front tube on the CRFX and shortly latter my Nefiews KDX had a flat front as well. Must be something in the air.

Glad you guys got out for a ride and happy birthday to the both of yas. Hopefully 2009 will be a good one for the both of yas. Mike hope your back is doing good.
Dirtbikes are more fun than a new tub of butter!

I went to a DNR meeting and saw a picture of Ted and Connie planting trees.

Happy BD Ted
Yeah, life is short! The saying goes that the one who dies with the most toys wins. Not true - the ones that use their toys to enjoy time with others wins! Mark Weissenborn
T

Happy Birthday to the most dedicated rider I know.
T

HBD youngster. Are you planning another Penton, Jackpine ride this year?

Happy birthday to KTMMike too

HBD you too Yahoos!
What a great way to celebrate. :cool:
Success isn't permanent, and failure isn't fatal.
M. Ditka
"Life is a series of events. True achievement becomes possibile as an individual comes to an awareness of who has control over causing these events"

Hope you had a great day, Ted. Happy Birthday! :cool:
What if the hokie pokie IS what it is all about ????
Funny thing I've noticed; It seems the harder I work, the more 'lucky' I am!

HBD Mike and Ted - Looks like there was a whole flock of turkeys in the woods that day!
"Even if you're on the right track, you'll get
run over if you just stand there." - Will Rogers

I think I found a picture of Young Ted In VMX magazine, at the Isdt Reunion ride. Issue #37 p.42. Sorry for picture quality, no scanner available. 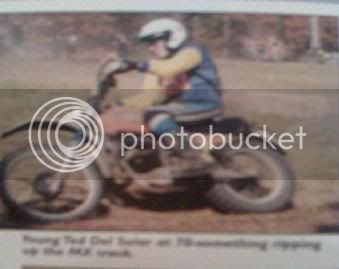 Y
On Any Monday