Digger is one happy camper

As his pop happy with him :)

Digger went 1-1 Saturday and Sunday for the overall both days at Big Air. It was a huge boost to his confidence

I tried telling him that it was his new Michilin Starcross tires that did it for him this weekend. That and the new high performance Bel Ray chain lube I switched to. But he is convinced that it was all him....Kids...what do they know :rotfl:

Although he is trying to prove me wrong I think. I told him to really wring that little CRF100 out, rev it to the moon. I told him that those little bikes are bulletproof. And they are. But he is starting to float valves down the straights....very cool. He sure aint babying it. 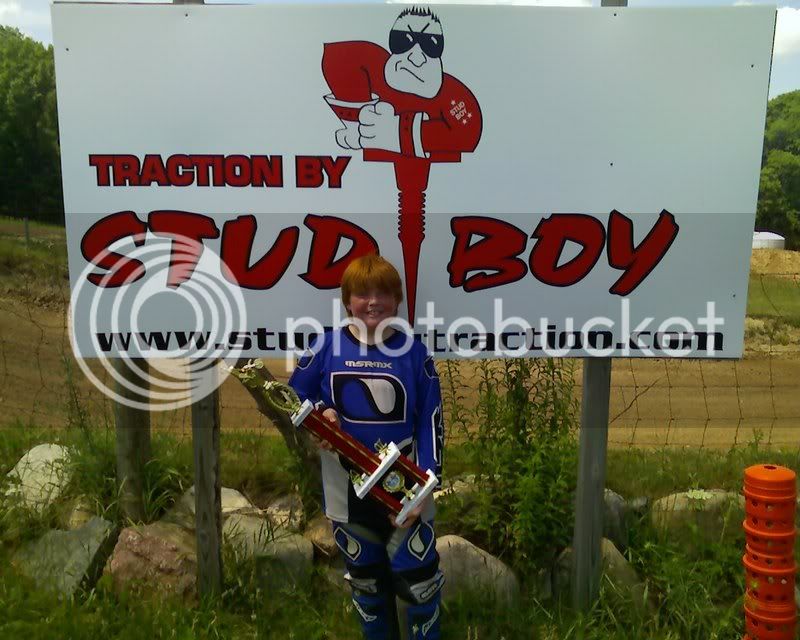 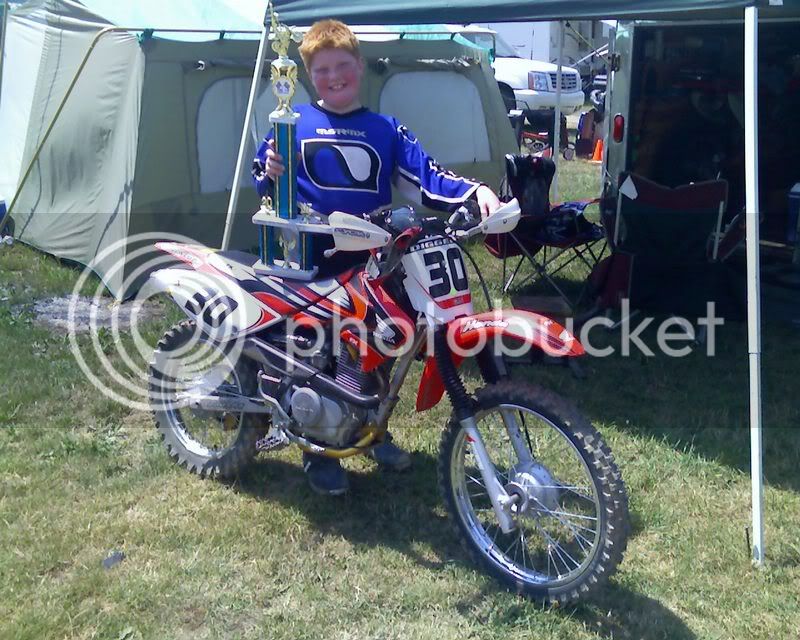 It was a good weekend for the MTR's :cool:

Congrats buddy! :cool:
"One of the penalties for refusing to participate in politics is that you end up being governed by your inferiors."

Congrats Digger!! Hopefully I'll be able to make it to a Big Air race this summer to watch you race.

MXGirl230 said:
Thanks for supporting Bel-Ray :cool: (sponsor, in case you don't pay attention to my sig.)
Click to expand...
Im lovin that stuff. I origionaly bought it for my Vstrom so I can lube the chain and not fling gunk all over the bike. But am finding that it works just as well on Digger and I's bike. Its the Super Clean lube. Spray it on and it dries in like 10 minutes so it wont fing off. Way cool.

Dirtbikes are more fun than a new tub of butter!

Yoooooooo Digger,, congradulations on that SOLID victory! When your dad told me what he had done to your scoot, and told me how good of a season you have been having and THAN let me sneek a cruise on the Championship grade CRF100 of yours I KNEW the big one was comin - just a matter of time!!
Atta boy Dig - ats pickem up and layin em down good buddy!!
Better give that pappy and mom of yours a HUGE hug for helping you get this far!!
Congrats Don - you gotta be one PROUD dad!!!
Woodsy
PROUD MEMBER OF INCA: International Nut Case Association - a YT2 INC. Subsidiary

TO RIDE IS TO LIVE - TO RIDE WITH MY BROTHERS IS TO LIVE FULFILLED. Woodsy

A: you are never lost if you don't care where you are. B nothing a ride on a CT110 can't cure. NZAMBON :boss:

Next year he is moving up to the 85 beginer class and racing the big track. We will be picking up a YZ85 very soon.

Hey speaking of Bel Ray products. Who sells it on the west side? Bostons (metric motors) West shore, Babits, Bills, Powers???? I want to get some more of that chain lube. I ordered that can along with some other stuff but it would be nice to get it localy.
Dirtbikes are more fun than a new tub of butter!

Yzman400,
Powers Has It In Stock Usually.

D.LEATHERS said:
Yzman400,
Powers Has It In Stock Usually.
Click to expand...
thanks. Ill check next time I am up that way.
Dirtbikes are more fun than a new tub of butter!

Dude its too bad your wife didn't get that on the vid camera. From the little I saw that was spectacular. I looked up to see dust and an upside down 50 4ft in the air and then Joe litterly running out of his shoes to get to him.

But he seemed pretty happy walking back to the trailer Sunday with his big shiny trophy. Thats all that matters. Bike can always be fixed.
Dirtbikes are more fun than a new tub of butter!

I think Digger had to be the most pumped I have ever seen him this weekend. He came the track just a pumping that fist in the air on Saturday. Eric's butt is still a little sore yet today, and so is mine. Michigan MotoX got some good pictures of us this weekend.

Hey how did you get those images off there site. I tried to right click and save as and it wouldn't let me. They have it locked down somehow. Sometimes I can get them to save others they are locked down. Strange
Dirtbikes are more fun than a new tub of butter!
You must log in or register to reply here.
Share: Facebook Twitter Reddit Pinterest WhatsApp Email